What a woeful start.

Some GCSE-educated dickbrain doesn't know the difference between the flags for North and South Korea.

We could have had a full-blown diplomatic crisis on our hands before the Olympic ceremony.

Brings into question why some of the events start before the opening ceremony, and why some are being held in a different country to the host city. I'm all for sharing the wealth and good times a little, but this is generosity gone too far. (About 400 miles too far north.)

And it doesn't bode well for the rest of the tournament if we can get something as basic and important as flags so badly wrong. What next, Borat's version of the Kazakhstani anthem being played at a medal ceremony?

Koreans, on behalf of Brits with a modicum of intelligence, I'd like to apologise.
Posted by Jon Lymon at 13:11 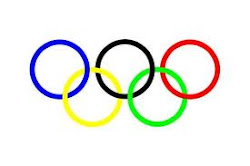 If you think these are the stains from five coffee mugs, best move on.

PURCHASE THIS NOVEL FOR NEXT TO NOTHING